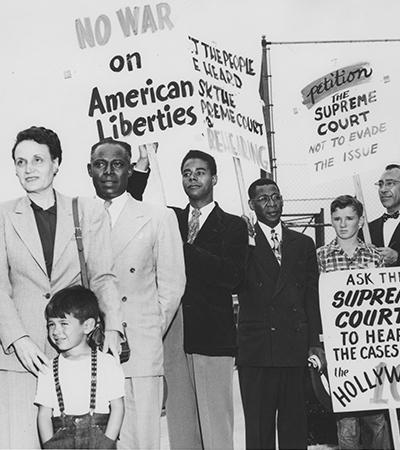 The House Un-American Activities Committee (HUAC) had been created in 1938 within the House of Representatives to investigate suspected communist infiltrators. Their focus was on locating communists within the government, sub-committees of the government, and Hollywood. In October 1947 HUAC convened a hearing in Washington, D.C., to investigate subversive (traitorous) activities in the entertainment industry. 41 screenwriters, directors and producers were legally summoned to attend.

By the 1930s Communism had become attractive to many people as the Great Depression devastated the United States. Many Americans were disappointed with the country’s capitalist economy. The Communist Party of America devoted much of its energy during the Depression to fighting for the unemployed, farmers losing their land, African American rights, as well as attempting to found labor unions. Its membership reached its peak of 85,000 in 1942, just as America entered World War II. There were also many others who sympathized with the aims of the party though they never became members. A number of those in the entertainment industry were part of this movement, especially those involved in projects founded under the Works Progress Administration to provide employment to actors, producers, and writers during the Depression.

After World War II, with the onset of the Cold War and the rise of anti-Soviet feelings, the American Communist Party increasingly came under attack. The Second Red Scare, a fear-driven phenomenon from the mid-1940s to 1957 took off. It was brought on by the growing power of communist countries. Many in the U.S. feared that the Soviet Union and its allies were planning to forcefully spread communism around the world, overthrowing both democratic and capitalist institutions as it went. By 1945, HUAC had become a standing (permanent) committee as the federal government began to aggressively root out perceived subversive activities.

Most witnesses at that October 1947 HUAC trial were willing to respond to the committee’s central question: “Are you now or have you ever been a member of the Communist Party?” Those who confessed to membership were offered the opportunity to name party members, thereby regaining their good standing with the committee and, as well as the American film industry.

However, ten witnesses — all current or former Communist Party members — banded together in protest, refusing to cooperate on First Amendment grounds (freedom of speech, right of assembly, freedom of association). The ten were screenwriters, actors, directors, and musicians. On November 24, 1947, after a highly publicized trial, HUAC found the group – who became known as the Hollywood Ten – in contempt (defiance) of Congress. Convicted in federal court the following year, they were given sentences of six months to one year in prison and fined $1,000.

To add to their misery, members of the Hollywood Ten were also fired by a group of studio executives. With the exception of Edward Dmytryk, who agreed to cooperate with HUAC while imprisoned, the Ten were severely blacklisted (banished, snubbed) by the film industry for years to come. A few of them were able to write scripts under assumed names. Some travelled to Europe where they found work.

The blacklist lasted until 1960, when Dalton Trumbo, a member of the Hollywood Ten, was credited as the screenwriter of the film Exodus (1960), and publicly acknowledged by actor Kirk Douglas for writing the screenplay for Spartacus (also 1960). 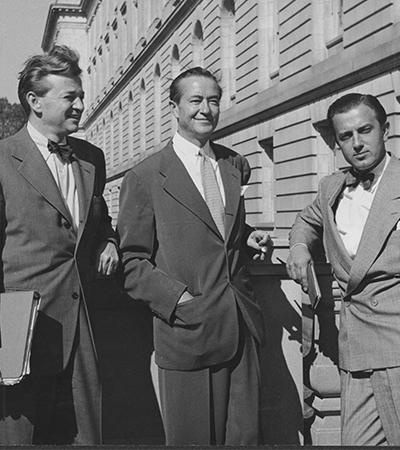 Adrian Scott was born in 1911 into a middle-class New Jersey family. After serving a short stint as a film critic and magazine editor, he became a Hollywood screenwriter in 1939. But he found his real calling in 1944 upon joining RKO Pictures as a film producer. He and director Edward Dmytryk, a future fellow Hollywood Ten member, teamed up on a string of successful dark thrillers. Scott was at the height of his career in October 1947 when he was subpoenaed to testify at House Un-American Activities Committee (HUAC) hearings. He had joined the Communist Party in 1944. 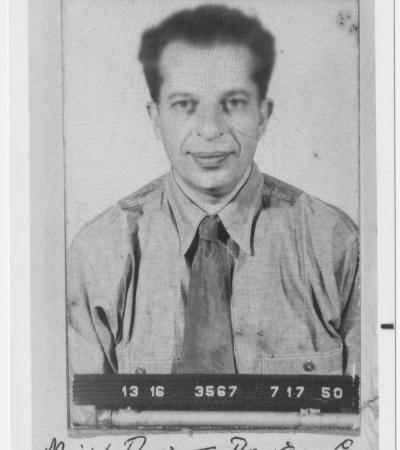 Screenwriter Albert Maltz was born in 1908 to an affluent Jewish family in Brooklyn, New York. After earning a master’s degree in playwriting from the Yale School of Drama, he began writing sociopolitical plays that were produced by New York-based progressive theatrical companies such as the Group Theater. He also wrote novels and short stories. Influenced by the works of political philosopher Karl Marx, he joined the American Community Party at the height of the Great Depression in 1935. In 1941, Maltz became a screenwriter for Warner Bros., which was known for its socially aware dramas. 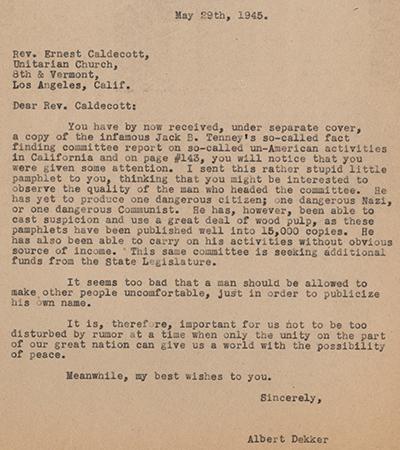 Albert Dekker was born in Brooklyn, New York, in 1905 as Thomas Albert Ecke Van Dekker. He began acting in high school stage productions but in college intended to become a psychiatrist. A friend talked him into an acting career instead. He made his professional acting debut in theater in 1927. After ten years, Dekker made his Hollywood debut in 1937 in The Great Garrick. Most of his remaining career was as a film actor. He appeared in about 70 films from the 1930s to the 1960s, many times playing villains. 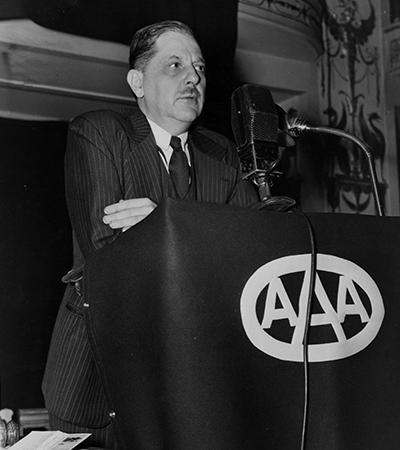 Thurman Arnold (1891-1969) was a major iconoclast of American law and a great liberal of the 20th century. Born in Laramie, Wyoming, Arnold’s western upbringing influenced his distinctive views about law and power. After studying at Princeton and Harvard Law School, Arnold practiced law in Chicago, served in World War I, and eventually returned to Laramie, where he was a prominent attorney, mayor, and state legislator in the 1920s.