Nellie Tayloe Ross (1876-1977) served as the first woman governor of a U.S. state. She was born near St. Joseph, Missouri to James Wynn Tayloe, a native of Stewart County, Tennessee, and his wife, Elizabeth Blair Green.

Nellie Tayloe attended a teacher training college for two years and then taught kindergarten in Omaha, Nebraska. While on a visit to her relatives in Dover, Tennessee, she met a young lawyer named William Bradford Ross, and they married on September 11, 1902. Ross decided to practice law in the West, and the young couple moved to Cheyenne, Wyoming. She had twin boys, George Tayloe and James Ambrose, in 1903. A third child, Alfred Duff, was born in 1905 and died in infancy. The last child, William Bradford, was born in 1912.

William’s general law practice in Cheyenne was successful, and he soon became one of the leaders of the Democratic Party in Wyoming. In 1922 William Ross was elected governor of Wyoming by appealing to progressive voters in both parties. However, after little more than a year and a half in office, he died on October 2, 1924, from complications following an appendectomy. The Democratic Party then nominated his wife, Nellie Tayloe Ross, to run for governor in a special election the following month to succeed him.

Nellie Tayloe Ross refused to campaign, but easily won the race on November 4, 1924, over Republican nominee Eugene J. Sullivan, an attorney from Casper, Wyoming. On January 5, 1925, she became the first woman governor of the United States. As governor she called for tax cuts, government assistance for poor farmers, banking reform, and laws protecting children, women workers, and miners. She urged Wyoming to ratify a pending federal amendment prohibiting child labor and she advocated the strengthening of Prohibition laws.

She ran for re-election in 1926, but narrowly lost to Republican Frank C. Emerson. After her defeat, Ross joined the Chautauqua circuit, which brought entertainment and culture for American communities with speakers, teachers, musicians, showmen, preachers, and specialists of the day. Ross gave speeches about her time as Wyoming governor. She then turned her attention to national politics by campaigning for Al Smith, the 1928 Democratic presidential candidate, and she became vice-chair of the Democratic Party in 1931.

Noticing her devotion to the Democratic Party and her political ability, President Franklin Roosevelt appointed Ross Director of the U.S. Mint, the first woman to hold that position, in 1933. She served four five-year terms before retiring from politics in 1953.

After her retirement, Ross contributed articles to various women's magazines and also traveled extensively. She made her last trip to Wyoming in 1972 at age 96. She died in Washington, D.C. in 1977 at the age of 101, and was buried in the family plot in Lakeview Cemetery, Cheyenne, Wyoming. 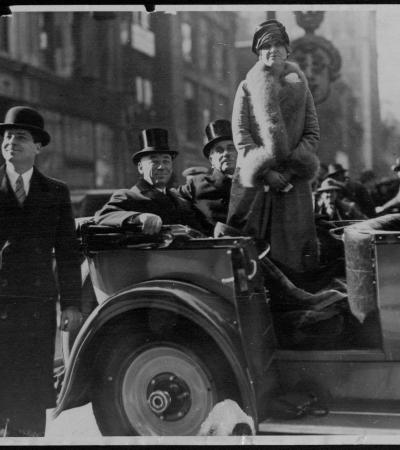 Additional content for this collection can be found in the "Inventory for collection.”