Eyewitness account dated April 16, 1933, of the Rock Springs Massacre by Andrew P. Bugas. He was born in Austria in 1866. He joined his father to work in coal mines in Pennsylvania. In 1885 he came to Rock Springs where for three-and-one-half years, he worked in No. 1 mine. Later in life he married, ran a saloon, and served in the Wyoming State Legislature. 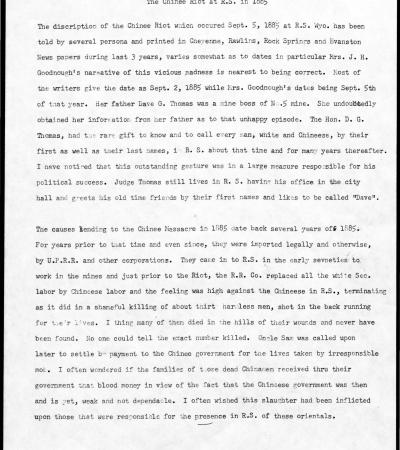 Handwritten and typed document in which A.P. Bugas (1865-1948) recalls the Rock Springs Massacre and what occurred afterwards. He also recalls the dragon used in Chinese celebrations in Rock Springs.