Oscar Stonorov (1905-1970) was a German-born American architect and sculptor. He was known as a modernist. Architects who worked in this style wanted to break with architectural tradition and design simple, unornamented buildings. Glass, concrete, and steel were common construction materials. Floor plans were functional and logical.

Stonorov set sail for America in 1929 and found work with a New York architectural firm before migrating to Philadelphia where he opened his own architectural office.

By 1931, Stonorov and his architectural partner Alfred Kastner (included in this topic) had received second prize in the Palace of the Soviets international competition. The two subsequently designed one of the very first union workers’ housing blocks in the U.S.—Philadelphia’s Carl Mackley Houses (1932-1935).

In the early 1930s, Stonorov and Kastner were eager to work on model housing for African Americans. Through Howard University’s president they met prominent Black architect Hilyard Robinson in 1932. The three developed a proposal for “Howard City” in Washington, D.C., to the federal government to finance a mixed-use, mixed-income housing program south of Howard’s campus. Unfortunately, the proposal failed because a local banker absconded with funds for the parcels of land.

A partnership between Stonorov and Louis Kahn during the 1940s resulted in scores of modernist public housing projects, many influenced by the pair’s shared European immigrant experience. Together the two architects authored influential books and papers on neighborhood planning and citizen involvement.

Stonorov conceived the idea for the Better Philadelphia Exhibition which ran from September 8 to October 15, 1947 at Gimbels department store. The exhibit showcased new ideas for revitalizing Philadelphia after years of depression and war. Stonorov recruited assistance from urban planner Edmund Bacon and others.

The Gimbel family of Philadelphia commissioned Stonorov in 1949 to design an exhibit on the work of prominent architect Frank Lloyd Wright. This exhibit, “Sixty Years of Living Architecture,” was the largest showing of Wright’s work ever mounted. It premiered January 1951 in Philadelphia at Gimbel’s Department Store. Stonorov traveled with the exhibit during its entire three-year international tour.

Stonorov spent the final 15 years of his career in partnership with J. Frank Haws. Stonorov was killed in a private plane crash in 1970 in Pellston, Michigan, on his way to inspect the construction progress of a new educational center he designed in Black Lake, Michigan. The center opened just weeks after his death, and is known today as the Black Lake Conference Center.

Additional content for this collection can be found in the "Inventory for collection." 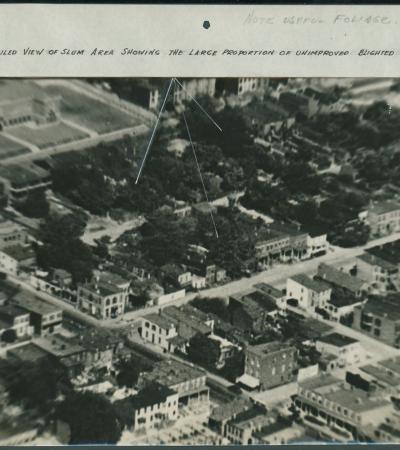 Working with prominent African American architect Hilyard R. Robinson, Stonorov and his partner Alfred Kastner, planned from 1932 to 1933 to provide a housing solution to a “blighted” location directly south of Howard University in Washington, D.C. 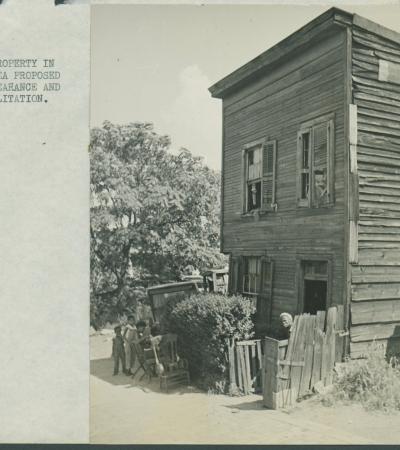 The intention behind the slum clearance project near Howard University was to provide adequate housing for the African American population, stabilize the local economy, and eradicate the “social plague” located there. Hilyard Robinson envisioned 600 units of housing with a combination of two and three story rowhouses and apartment blocks of eight stories. In the end, the proposal for Howard City failed because a local banker absconded with the funds for the parcels of land. 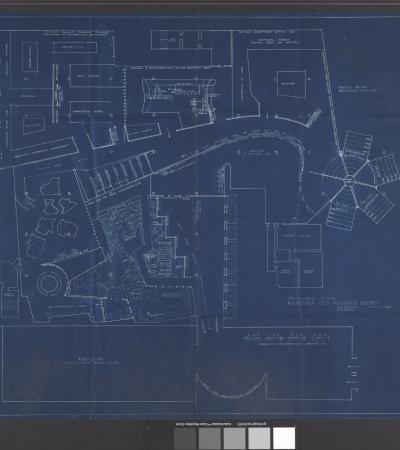 During the Better Philadelphia Exhibition Stonorov and Edmund Bacon enlist public support for their ideas by presenting their concepts in accessible terms as seen in this blueprint with slogans such as “The subject of this exhibit is you, your life, your family’s life in Philadelphia.” The blueprint also indicates Stonorov's and Bacon's modernist urge to clear-cut the city wholesale and start anew. 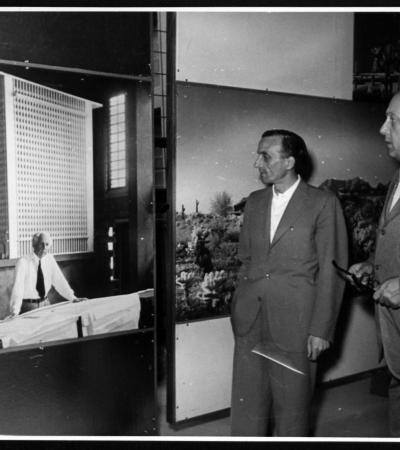 Stonorov (on the right) touring an unidentified man through the Frank Lloyd Wright Exhibition. The exhibit featured hundreds of large photographic murals such as these. 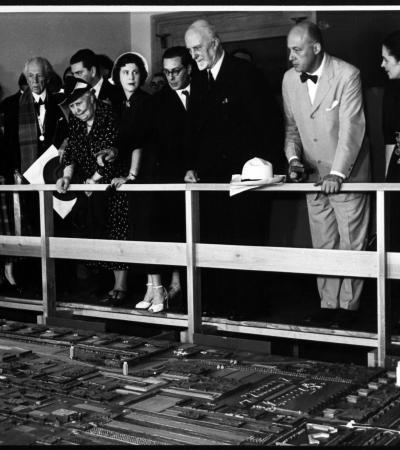 The exhibit featured a model of Wright's "Broadacre City" which represented Wright’s radical idea to resettle the entire U.S. population onto individual homesteads. The 12 x 12 foot model was meant as a prototype not as an actual building project. Wright envisioned that the low-density community represented in the model would be replicated across the U.S., creating a network of small communities connected by highways and telecommunication systems, such as radio and telephone. 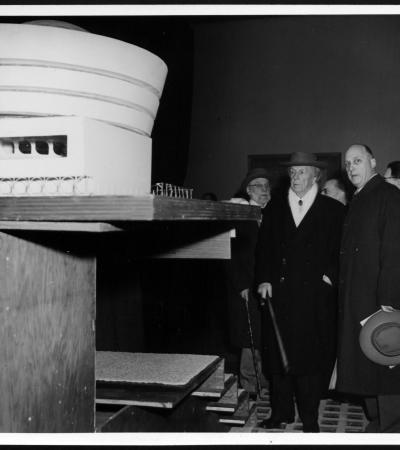 Wright was commissioned in 1943 to design a unique structure to hold the avant-garde art collection of mining magnate Solomon R. Guggenheim. Wright's spiral design recalled a nautilus shell with continuous spaces flowing freely one into another, while also using geometric shapes to express certain human ideas, moods, sentiments. For example, the circle represents infinity; the triangle: structural unity; the spiral: organic process; and the square: integrity. When the museum opened in 1959, Wright’s design was considered ahead of its time—even shocking to some. 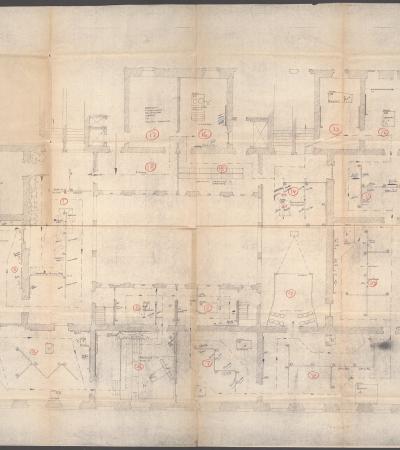 The world wide tour opened of the exhibit opened here in June 1951. 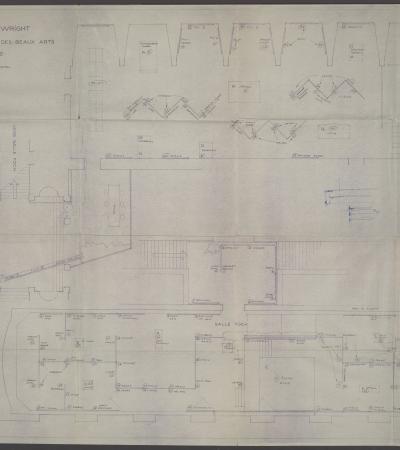 This floor plan of "Sixty Years of Living Architecture" shows placement of exhibit items during its display at the National School of Fine Arts in Paris, France, in April 1952. Stonorov and G. Vedres are shown as the exhibit architects. 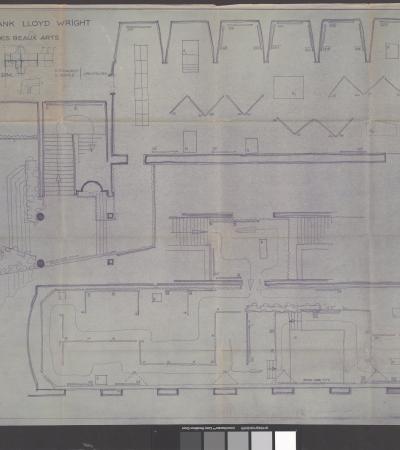 Another view of floor plan for "Sixty Years of Living Architecture" exhibit floor plan at the National School of Fine Arts in Paris. The placement of the large model for Broadacre City is shown. 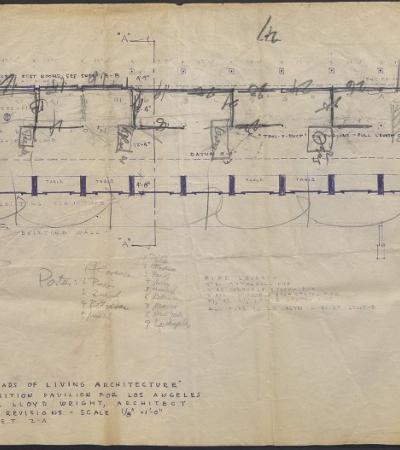 Revisions to a floor plan for "Sixty Years of Living Architecture" when it appeared in Los Angeles in 1954. 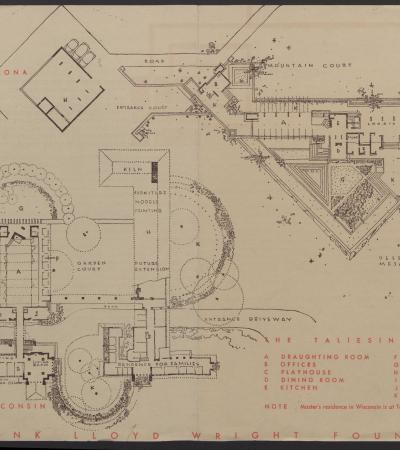 Architecture Plans for Taliesin Fellowship buildings in Wisconsin and Arizona for The Frank Lloyd Wright Foundation, 1951-1952

Architectural drawings done for buildings in Wisconsin and Arizona for the Taliesin Fellowship. The paper is labeled "The Frank Wright Foundation" at the bottom. The Taliesin Fellowship was an immersive apprenticeship program created by Frank Lloyd Wright and his wife Olgivanna in 1932. 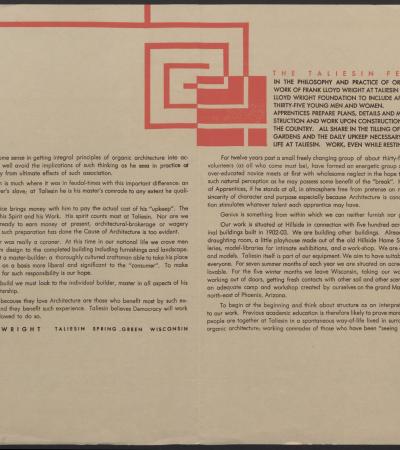 A text description of the Taliesin Fellowship with an orange graphic design-like logo at the top.